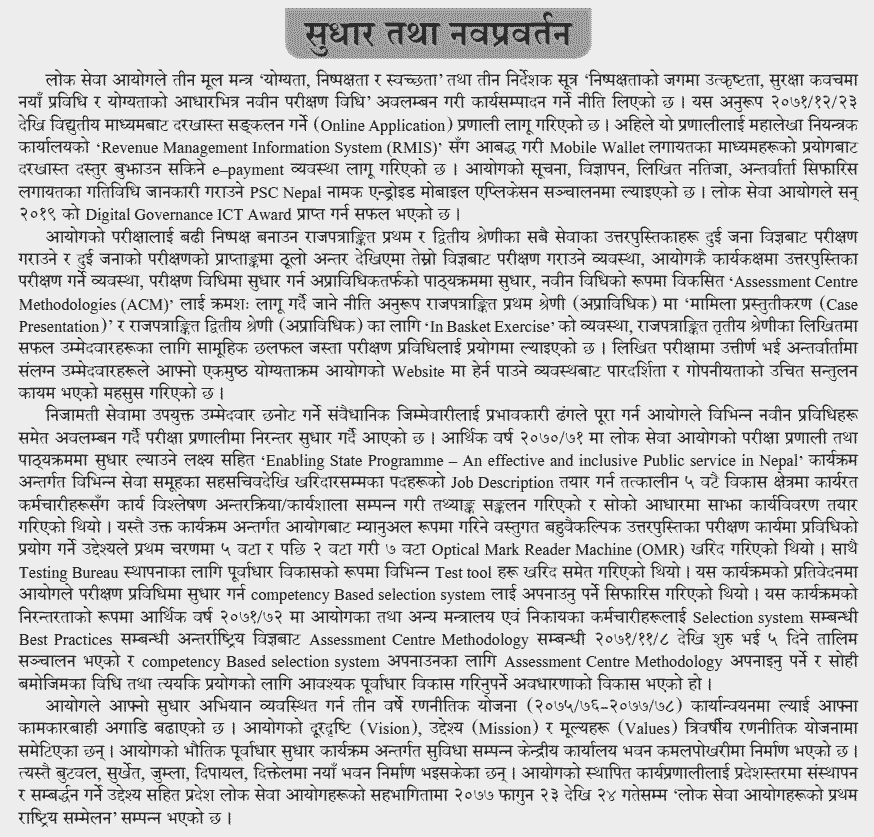 The Public Service Commission -PSC (Lok Sewa Aayog) has adopted a policy of adhering to the three basic mantras of 'competence, fairness and cleanliness' and the three guiding principles of 'excellence on the basis of fairness, new technology in safety armor, and innovative testing method within the basis of merit'.

In order to make the PSC examination fairer, the answer sheets of all Gazetted First and Second Class services will be tested by two experts and if there is a big difference in the test scores of the two, it will be tested by a third expert, the answer scripts will be tested in PSC's office, the non-technical curriculum will be improved. In line with the policy of gradually implementing Assessment Center Methodologies (ACM) developed as a method, provision of 'Case Presentation' in Gazetted First Class (Non-Technical) and 'In Basket Exercise' for Gazetted Second Class (Non-Technical), Testing techniques such as group discussions have been used for successful candidates in Gazetted Third Class Writing.

It is felt that a fair balance of transparency and confidentiality has been maintained by the provision that the candidates who have passed the written test and participated in the interview can view their qualifications on the Commission's website.

In order to effectively fulfill the constitutional responsibility of selecting suitable candidates for the civil service, the Commission has been continuously improving the examination system by adopting various innovative technologies.

In the Fiscal Year 2070/71, with the aim of improving the examination system and curriculum of the Public Service Commission, under the 'Enabling State Program - An Effective and Inclusive Public Service in Nepal' program Data was collected by conducting work analysis interaction/workshop and a common work report was prepared based on it.

Similarly, under the program, 5 Optical Mark Reader Machines (OMRs) were procured from PSC in the first phase and 2 in the first phase for the purpose of using the technology in the test of manual multiple choice answer scripts. Also, various test tools were procured as infrastructure development for the establishment of the Testing Bureau. In the report of this program, it was recommended that the Commission should adopt a Competency-Based Selecting System to improve the testing technology.

As a continuation of this program, in the Fiscal Year 2071/72, a five-day training on Assessment Center Methodology was conducted by the International Expert on Best Practice for Selection System for PSC and other ministries and agencies to adopt Competency-Based Selection System. The concept has been developed that the Assessment Center Methodology should be adopted and the necessary infrastructure should be developed for its use.

PSC has moved ahead with its implementation by implementing a three-year strategic plan (2075 / 76-2077 / 78) to manage its reform drive. The Commission's vision, mission, and values ​​are included in the three-year strategic plan. A well-equipped central office building has been constructed at Kamalpokhari under the physical infrastructure improvement program of PSC.

Similarly, new buildings have been constructed in Butwal, Surkhet, Jumla, Dipayal, and Diktel. With the objective of establishing and promoting the established working system of PSC at the state level, the "First National Conference of Public Service Commissions" has been held from 23rd to 24th of Falgun, 2077 BS with the participation of the Provincial Public Service Commissions.

Basis of Social Transformation: Development, and Expansion of Non-formal Education