Nepali workers who want to go to Israel have to pass at least 12 classes. The Ministry of Labor, Employment, and Social Security has issued a directive on sending Nepali aid workers to Israel. According to the directive, the worker should have received at least three months of training on caregiving from a training provider recognized by the Government of Nepal.

The guideline also states that workers who have passed at least 10 classes and completed 15 months of study in ANM or CMA are eligible to go to Israel.

The worker should have completed 25 years and not exceeded 45 years and should be 1.5 meters tall and weigh 45 kilograms.

The government will have to issue a public notice for workers going to Israel and call for applications. As per the directive issued by the ministry, the notice should be published on the website of the Department of Foreign Employment and in the national level newspaper.

To take workers from Nepal, the Israeli government will have to submit a demand letter to the Nepalese Embassy in Israel. After receiving the demand letter, the embassy will investigate and verify the demand letter. The information of which should be entered into the foreign employment information management system. Once entered into the system, the department must coordinate with the Israeli government's Population and Immigration Authority (PIBA) within 14 days and issue a public notice within 21 days. While issuing the information, details of demand number, post, remuneration, etc. should be kept.

Right to Select Workers: The Population and Immigration Authority (PIBA) of the Government of Israel will have the right to select Nepali workers who want to go to Israel. The Department of Foreign Employment will send the details of the qualified workers to the PIBA. There will be a labor agreement between the workers selected by PIBA and the employer. After the workers and employers sign the agreement, other processes will move forward. The department will also have to form a selection committee for the selection of workers.

The committee will call only the applicants who have reached the educational qualification for the weight and height test. Applicants who have reached weight and height will also have to take an English language test. The department will select the workers on the basis of the marks obtained in the English language and send them to PIBA. The department will send 25 percent more workers to the PIBA than the Israeli government has demanded. Similarly, the applicant will receive the information whether the worker has been selected or not through SMS.

The department will make a recommendation to the Israeli Embassy in Nepal for the visa of Nepali workers who have completed the employment agreement.

After the recommendation, the worker will have to apply for a visa in person at the embassy. Overseas workers must obtain orientation training before going to Israel. Similarly, the amount will have to be deposited in the insurance and welfare fund. 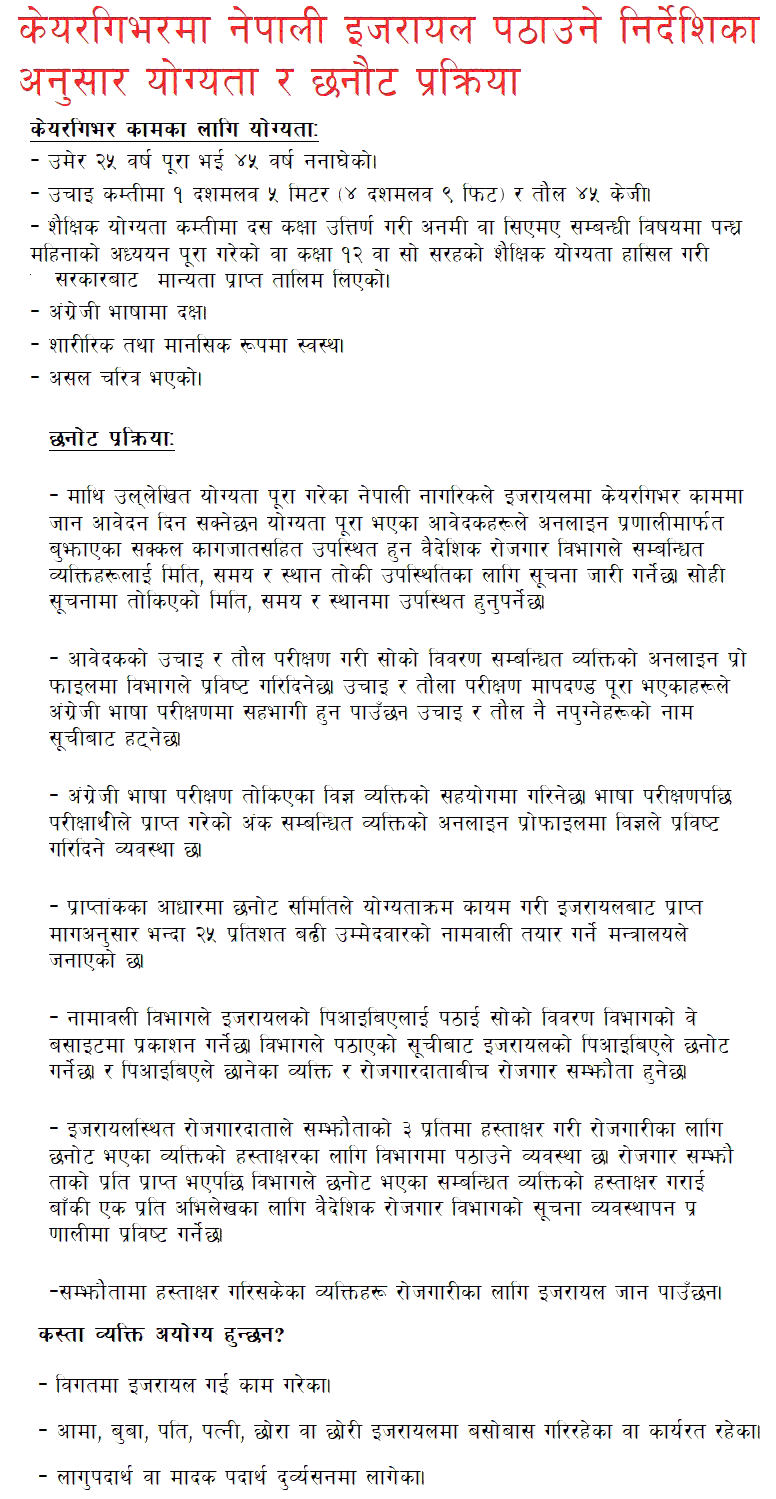 How to Choose IT College and Course in Nepal

How to Find a Good Online Course for Online Earning

Things to Consider Before Studying Abroad

How to Choose IT College and Course in Nepal