Armed Police Force, Nepal (APF Nepal) has played a fundamental role in maintaining law and order in the country. APF Nepal has shown the highest level of professionalism in the protection of civilians, disaster management, border security, safeguarding the borders, industrial security and curbing the illegal activities. The contribution of APF in conducting the different levels of the election in a fearless environment is commendable. The zero-tolerance policy against human rights violations and corruption is highly valued.

Armed Police Force, Nepal has been instrumental in law enforcement and maintenance of peace & order in the country. The level of preparedness of APF to manage the disaster is praiseworthy. The progress achieved by the industrial sector is directly linked with the security provided, and it is highly appreciated.

The organization is yielding the highest level of output despite limited sources available. Not only in the mandated task, APF, has given the remarkable contributions in the internal security duties to maintain the law and order in the country. The level of courage, professionalism, dedication, and motivation in the APF personnel is highly appreciated worldwide during disaster management in the country. The contributions of the APF in the field of border security, custom & revenue security and also in maintaining the law & order in Nepal are always exemplary.

The APF personnel are mobilized with a clear vision and mission to achieve the organizational goal. They have distinguished themselves through professionalism, dedication, courage and humanitarian ethos to prove the rationale of the organization's establishment. To uphold the trust and image of the organization it is preparing and mobilizing the skilled human resource as per the need to overcome the challenges.

The security forces are to be adapted with the changing dimension of security. The compendium of the photograph will be a useful resource to the readers, researchers, and scholars in the future. This is the authentic evidence of the APF activities in various forms of governance and administration. 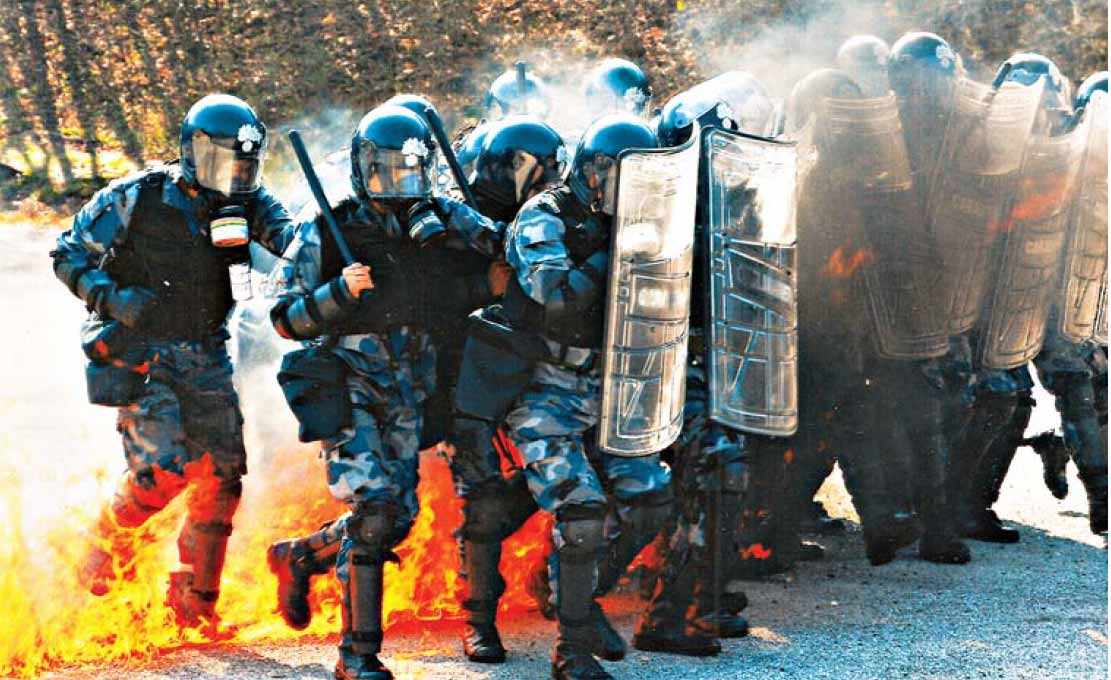 The mandate of APF Nepal:

Jan 31, 2000: Formation of Task Force Commission in raising APF under the convener ship of then Home Secretary Khem Raj Regmi.

Apr 21, 2000: Submission of the Taskforce Report to the Government of Nepal.

Sept 10, 2001: Government of Nepal provided the NCCN premise for the construction of APF Headquarters in Halchowk.

Oct 23, 2001: Then king bestowed APF with Bagalamukhi Nishan and color.

Mar 28, 2002: Then Minister of Home Affairs laid the foundation stone of APF Headquarters and at Halchowk.

The Administration Department is solely responsible for human resource management. It starts right before the recruitment and ends after retirement. Administration Department is committed to fulfilling the organizations vision as envisioned in the Armed Police Act. The department has made avail of modern information and communication technology to have the proper record of a routine jobs.

Armed Police Force, Nepal is promoting the sense of security among the people living in the border areas. Preventing trans-border crimes, unauthorized entry into or exit from the territory of Nepal, preventing smuggling and any other illegal activities are peacetime tasks of APF for securing the border of Nepal. APF has deployed its manpower across the border of border sharing countries with Nepal as per sanctioned structure.

The role and responsibilities of security forces are changed with political changes. The human Resource Development Department is taking this as an opportunity to show its highest level of preparedness to cope with the situation and always been ready. Recruitment to Retirement (RtoR) is the scope of the department. Professionalism, integrity, dedication, respect and pride, altruism, compassion are the core values of the organization. The proper syllabus and its proper implementation with timely revision are necessary to produce such officers. Considering the role of peacekeeping, Human Resource Development Department is giving its highest level to prepare peace ambassadors in the international forum. HRD is closely observing the overwhelming change in information and communication technology and is prepared to adapt for any situation.

Armed Police Act has envisioned to protect the life and property of the people. To carry out the mission of maintaining the peace and order in the country, the operation department has played a vital role. Safeguarding the nation, protecting the liberty of the citizen and man, carrying out anti secessionist activities, managing the disasters, controlling the armed struggle, protecting of civilians, protecting the vital installations and important persons are possible only when the officers with high level of professionalism, integrity, motivation, dedication, and ethical values, are prevailed. Proper and strategic deployments are the most important endeavor to accomplish the objectives, mission and vision of the organization which the operation department is doing.

With the modernization of the present world, the concept of the modern city has also emerged in developing counties like Nepal. This also has facilitated the requirements of human kinds in all aspect of development and on the other side of the coin, it has inherited challenges like high population, unemployment, etc. followed by security-related modern threats as well as unexpectedly generated calamities from which the metropolitans in Nepal will not remain untouched. In the case of Nepal, the Kathmandu valley should be termed as the center of gravity in every aspect and its security is a huge responsibility in itself.

The National Armed Police force Academy with motto "Knowledge, Virtue and Leadership", was established on 14th July 2007. Academy has the sole aim of producing officers with professionalism, academic thoughts, and visionary capabilities. Academy has been conducting Basic, Mid-level Management and High-level Management training with a broad spectrum. The vision of the Academy is to produce officers with broad-based training in both professional and academic subjects designed to serve as a foundation for the future leadership of the Armed Police Force, Nepal and encompasses all activities to generate a center of excellence.

Since2010, Armed Police Force, Nepal has started to train its manpower to manage the disaster. The specialized manpower was focusing to manage the different types of disasters not only limited to an earthquake but also to other disasters. The contribution of APF disaster management team was highly appreciated during the earthquake of 2015. The spontaneous expression of civilians to praise the excellent job of rescuers was remarkable at the moment.