The Commission (Lok Sewa) is involved in selecting meritorious candidates required by the government of Nepal for various vacant posts in the civil service, Nepal Police, Nepal Army, Nepal Armed Police Force, and other government bodies. The continuity of the public service commission (P S C) has never been hindered since its inception. The present constitution of Nepal 2015 (2073 BS) has designated the public service commission as an independent constitutional body.

According to the constitution of the Public Service Commission in sub-section (1) of Article 242 of Part 23 of the Constitution of Nepal, there is a provision that the commission will have a chairman and four other members. The President shall appoint the chairman and members of the Public Service Commission on the recommendation of the Constitutional Council and at the time of such appointment, at least fifty percent of the members of the commission shall be from among the persons who have been in government service for a period of twenty years or more and the remaining members shall be from science, technology, art, literature, law, public administration, There is a provision to be appointed from among the people who have achieved fame through research, research, teaching or any other important work in sociology or other fields of national life. In this way, before the appointment, there is a provision for a parliamentary hearing to be held through a fifteen-member joint committee in accordance with federal law, consisting of members of both houses of the federal parliament.

According to the provisions of the constitution, there will be only 5 officers including the chairman, since there were more officers working in the Commission before this constitution came into effect, the appointment of the previous seven officers has been provided by clause (3) of Article 301 of the Constitution of Nepal.

In addition to civil service posts, there is a provision that the Public Service Commission will be responsible for conducting the written examination for the posts of the Nepal Army, Nepal Police, Armed Police Force, Nepal, other federal government services, and organized organizations.

In addition to the above duties and responsibilities, there is a provision to consult the Public Service Commission on the following subjects:

According to the Public Service Commission Act, 2066, the Commission will select suitable candidates through one or more of the following methods:

d) Other methods prescribed by the Commission.

After receiving the request to fill the vacant post from the concerned body, the Public Service Commission determines the number of posts to fill the post according to the relevant laws and regulations.

In order to maintain fairness and accuracy in the selection process, the Commission has adopted a policy of neutrality by adopting a system in which the officials involved in the written examination and interview cannot know each other's work and actions in the preparation of question papers, revision of question papers, examination of answer sheets, the conduct of interviews and interviews.

The highest confidentiality is maintained in the exam as there is a practice of keeping the first code in the answer sheets received after conducting the written examination and assigning the second code to the official of another branch.

Candidates who are selected for the interview will be interviewed with the involvement of experts in the relevant subject and the marks given by one will be given secretly so that the other will not see them. Such marks will be opened only at the time of the candidate's merit order and recommendation. In addition to this, the marks obtained by the candidate in the written test will not be known during the interview and will be sent only at the time of merit order and recommendation.

The Public Service Commission has been updating the list of experts and experts from time to time for the work of the commission, such as question paper preparation, question paper revision, answer book examination, interviews, psychological personality test, curriculum development, etc.

The commission appoints them secretly for a specific type of selection work. The commission has already started the process of Screening Test for certain posts, in which candidates are more involved. It has been arranged that only those who pass the preliminary stage examination can participate in the main examination.

After the final selection of candidates from the open competition, in the case of gazetted civil service posts, in the case of posts under the Ministry of General Administration and under separate laws and regulations, there is a provision to recommend to the agency that administers such services. If the candidate chooses the same office, there is a provision that the one with the higher qualification should be recommended first.

When sending a letter of recommendation to the relevant body for an appointment, there is a provision to send one copy of the application form of the concerned candidate and copies of the certificates submitted along with it.

In the case of security agencies and other government services/organized organizations, the tasks from determining the percentage to conducting the written examination are done according to the procedures mentioned above. 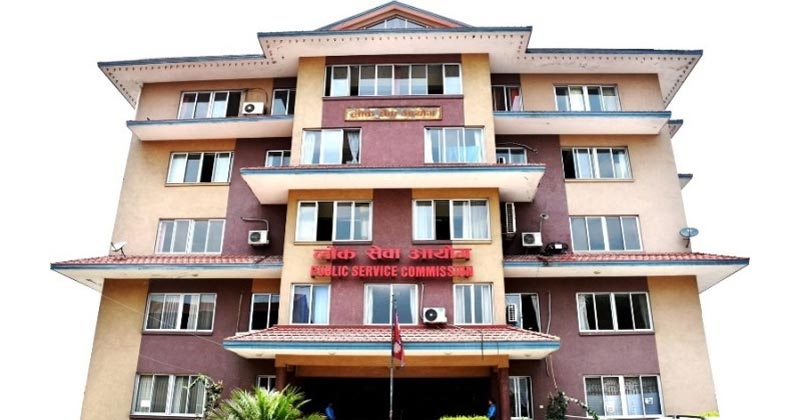