The academy brings together multidisciplinary stakeholders for executing activities related to Science, Technology, and Innovations (STI)  to create a suitable atmosphere for research and innovations in Gandaki Province. Furthermore, the academy also promotes the skills and knowledge of youths, scientists, and technicians for preparing them to lead the STI sector in Gandaki Province, while contributing toward sustainable utilization of resources and holistic development of Gandaki Province through research and innovation in science and technology.

GPAST envisions becoming an apex platform for researchers, academicians, innovators, and entrepreneurs for multidisciplinary research and development in the field of science and technology in Gandaki Province.

i) development of knowledge, skills, and expertise in the field of science and technology,

ii)sustainable utilization of natural resources to improve the livelihood of Nepalese people,

iii) promotion of research culture and support of research-oriented education, and

iv) to develop a linkage between STI with developmental works and services.

In order to achieve the objectives, the academy conducts various activities related to STI such as the development and transfer of technology thus increasing the productivity of daily consumable and export quality goods, assisting the provincial government in developing quality testing criteria for the aforementioned products, leading research and studies in priority areas of Gandaki Province, and linking them to sustainable development goals. The academy also identifies indigenous technology and knowledge, and natural resources prevailing in the Gandaki province for their promotion, development, and sustainable utilization.

In addition, GPAST also collaborates with other institutions, promotes the participation of individuals and private sectors, provides grants and fellowships to institutes, groups or individuals, and receives assistance from other institutes for the development of science and technology. GPAST is also entitled to publish journals, books, bulletins, or informational materials; and to organize local, regional or global conferences, meetings, and symposiums related to STI. Likewise, this academy can act as a policy think tank to assist the provincial government to make decisions about the utilization of cutting-edge technologies. Apart from these, the GPAST can conduct required activities in order to achieve its objectives.

The executive council is the apex body of the GPAST which legislates plans, policies, and strategies required for the efficient management and operation of the academy. The council is also responsible for the approval of assistantships for other institutions. The council also emits opinions and decisions on the proposals of the executive director, such as yearly plans and budgets and setting the criterion for requirements of scientific and technical personnel.

The GPAST- Gandaki Province Academy of Science and Technology presents itself as a fully functional autonomous institution of continuous succession, where the Scientific Coordinator, the Scientific Council, and the Executive Committee are the central organs and determinants of the orientation of our activities. 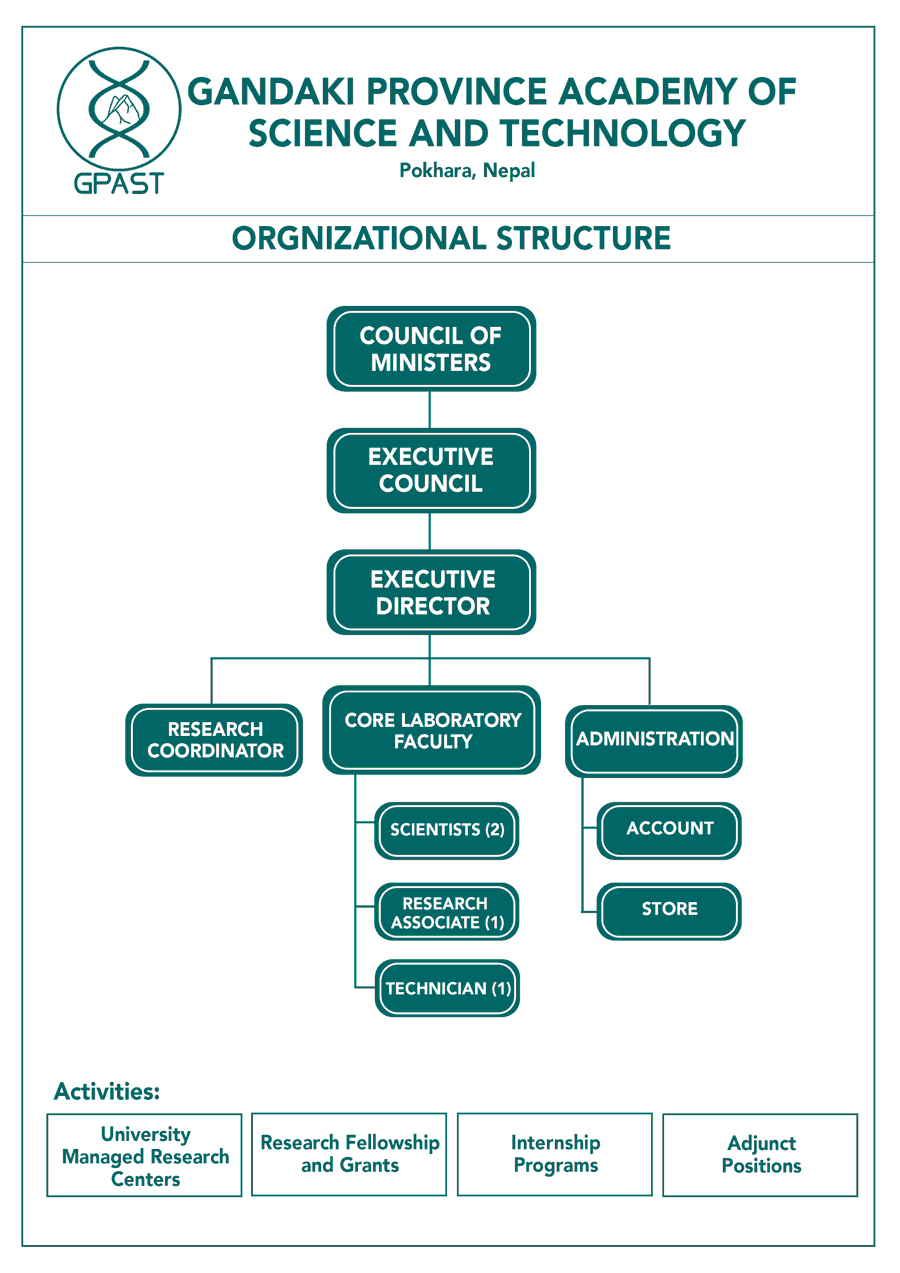 The academy is increasing its collaborations and cooperation to support researchers from Gandaki province to build a team with the best minds and facilities to enhance their skills and expertise in the field of research. The academy will especially focus on Research and Development (R&D) related organizations, international collaborations, and brain chain programs.

GPAST has already signed a memorandum of understanding (MOU) with Gandaki University, Agriculture and Forestry University (AFU), and the National Young Academy of Nepal (NAYAN) for conducting collaborative research activities.

In the current scenario, GPAST has taken part in organizing different workshops and Conferences like the Workshop on Predatory Academic Practices in South Asia and National Conference on Recent Trends in Science, Innovation, and Technology (RTSTI) in a collaborative approach, and likewise, some more are in the pipeline.

GPAST has established a province-level laboratory at Pokhara 33, as a common R&D platform for the public, academia, industries, governmental, non-governmental, and private organizations of Gandaki Province.

Although GPAST has planned to involve in various sectors and areas of science and technology, for now, it has prioritized its research toward phytochemistry, food chemistry, nutraceuticals, and pharmaceuticals. So, the lab is equipped with both basic and modern technologies required for the research of these thematic areas. Equipment like rotary-evaporator, Ultra-Performance Liquid Chromatography (UPLC), Thin-Layer Chromatography (TLC) appliances, etc. have already been set up in the lab and many other instruments are scheduled to arrive soon after completing the procurement process.

Researchers can prepare extracts from various plants and study their biological activities in vitro and further expand their research work in isolation and identification of active phytochemicals. Quantification of major phytochemicals in the different plants and formulations and other pharmaceuticals can be achieved using the UPLC system.

Moreover, this lab is also capable of developing formulations, paving the way to commercialization. Thus, promoting the prosperity of Gandaki Province through the utilization of available natural resources.

Currently, the research laboratory of GPAST has a team of two scientists, one research associate, and one lab technician working collaboratively to operate the lab. Individual researchers, students, and faculties of different institutions can make optimum use of the lab facilities.

GPAST has planned to expand the research facilities in other thematic areas (engineering, biotechnology, molecular biology, etc.) in the near future.