Nepal Sanskrit University (नेपाल संस्कृत विश्वविद्यालय) was formally established in Beljhundi, Dang, Lumbini Pradesh Nepal on the 25th of Mangsir 2043 BS (1986 AD) with the objective of making Sanskrit education accessible to all in Nepal and spreading spiritual values ​​and nobility in accordance with the demands of the times.

The work started by the then King Mahendra Bir Bikram Shah in line with the objective of developing Sanskrit education as a center for institutional and layered development in Nepal has been established through the activism of King Birendra Bir Bikram Shah and the sacrifice and tireless efforts of the Nepali people. 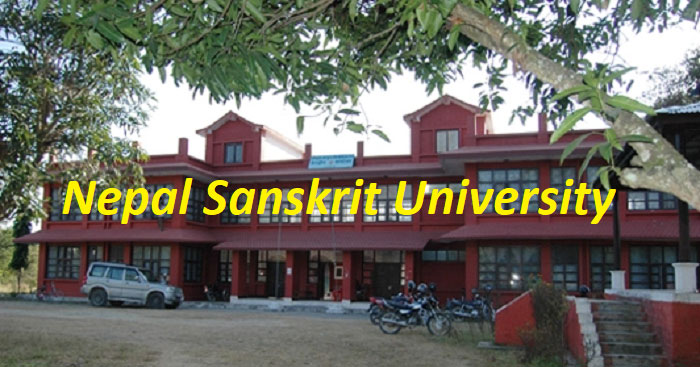 For this purpose, the background of this university has been prepared in the year 2010 by donating 1200 (twelve hundred) Bigahs of land in Deukhuri Upatyaka of Dang from Dang educationists and local Majgaiya families. As a result, Janata College was established in Bijauri, Dang in 2011 BS, and an international level conference was held in the same place in 2024 BS.

Against this background, it was announced to establish Mahendra Sanskrit University in 2026 BS. Under the leadership of Yogi Narharinath, 326 Bigahs of land were collected as donations from local educationists and other Sanskrit enthusiasts and in 2031 BS, the office of the Dean of the Institute of Sanskrit Studies was established in Beljhundi, Dang.

Objectives of the establishment of Nepal Sanskrit University:

NSU is committed to imparting quality education from the Uttermadhyama level to Ph.D. degrees in different disciplines. Apart from its constituent Viddyapeethas NSU has provided affiliation to different Viddyapeethas and Campuses to conduct various Programmes. Up to Shastree level students can pursue their degree in Sanskrit based subjects known as classical subjects as well as modern subjects.

So far research work is concerned NSU conducts short term and long term research on diverse fields. Around 70 scholars have been cantered on Ph.D. from NSU and every year more than 60 Scholars enroll for their Ph.D. The University publishes a Sanskrit journal ‘ Himavati’, Nepali news bulletins, and a yearly calendar, Panchanga, whereas all Vidhyapeetha publishes their own journal. The university runs mainly three kinds of academic programs.

In a diverse discipline as per the university rules and regulations.