Bharatpur Metropolitan City (Nepali: भरतपुर महानगरपालिका) was established in 2017 (2073 BS) as a local government of Nepal. It is a city in southern central Nepal with a population of 280,505. Bharatpur Mahanagarpalika is the fourth largest city in Nepal, as well as a separate metropolitan authority. The headquarters of this Metropolitan City is located in Bharatpur 10, Chitwan.

Bharatpur is one of the fastest-growing cities in Nepal. It lies on the southern bank of the Narayani River and serves as a commercial center of the Chitwan district and the central region of Nepal. Most of the shopping area lies in the district of Narayangadh, while government offices, hospitals, and colleges are situated in other parts of the city, including Nepal's premier cancer hospital, B.P Koirala Memorial Cancer Hospital.

In March 2017, Bharatpur was declared a metropolitan city after Chitwan Municipality, Narayani Municipality, and Kabilas Village were merged into it.

Located on the banks of the holy Narayani River and in the lap of the famous religious site Devghat Dham, the Bharatpur Metropolitan City has made a name for itself as one of the leading cities in the country in terms of history, society, economy, politics, religion, and culture. In 2035 BS, the then Bharatpur Village Panchayat and Narayangadh Village Panchayat were merged to form Bharatpur Nagar Panchayat.

The Magalpur, Phulbari, Gitanagar, Sivanagar, and Patihani were upgraded to Bharatpur Sub-Metropolis. Similarly, the decision of the Council of Ministers of the Government of Nepal dated 2073-11-27 has added Narayani Municipality, Chitraban Municipality, and Kavilas VDC in this Bharatpur Sub-metropolis and upgraded it to Bharatpur Metropolitan City.

Bharatpur Metropolitan city lies on the bank of the Narayani River which is renowned for its historical, social, economic, cultural, and religious perspectives. It is the Headquarter as well as a commercial center of Chitwan district. Bharatpur is the establishment in 2035 B.S. (1979 A.D.) which has been declared as a municipality in 2048 B.S. (1991 A.D.) and upgraded to Metropolitan City on March 10, 2017.

It is located at the center of the Mahindra (East-West) highway. The proximity of this city from Kathamndu (146 km), Pokhara (126km), Butwal (114km), Birgunj (128 km), Hetauda (78 km) and Gorkha (67km) has augmented the importance of its advantageous geographical location. In addition to good road access, Bharatpur has regular daily air services for Kathmandu, the capital of the country, and Pokhara touristic city.

The population of Bharatpur Metropolitan city according to population census 2011 is now 2,80,502. It is situated at an altitude of about 251 meters from the sea level. The temperature ranges from 10° C to 40° C. The coolest Month is January and the hottest one is June. The average annual rainfall is 1500mm.

Bharatpur is the city of migrants. Almost all people, except some indigenous groups like Tharus, Darai, Kumals, and Chepangs, are immigrated from different parts of the country. The migration had taken its root after the eradication of Malaria. The inception of the Rapti Valley Development Project, in the sixties, promoted another surge of migration by distributing land. So due to migration from different parts of the country combination of varieties of castes and ethnic groups is found dwelling in the Metropolitan city.

operate 3 flights in a week

Most of the people except some indigenous groups like Tharus, Darai, Kumals, and Chepangs immigrate from different parts of the country. The migration had taken its root after the eradication of Malaria. The inception of the Rapti Valley Development Project, in the sixties, promoted another surge of migration by distributing land. So the combination of varieties of castes and ethnic groups is found dwelling in the Metropolitan City. Among them, the Brahmins, Chhetries, Newars, Magars, Tamangs, and Gurung are major people of Metropolitan City.

Religion:
Hindu is the main religion of Bharatpur Metropolitan city Which has 85.5% of the population. Other religions are Budda, Islam, Christians, and Prakriti.

The economy of Bharatpur was traditionally based on agriculture. The agricultural land is gradually converted into the residential area. A large number of poultry industries, a substantial volume of poultry products for export trade. The major companies have opened their branches in the city. There are Coco-cola, Beer, Poultry, Chocolate industries.

Devghat lies on 8 km northwest boarder of Bharatpur Metropolitan. Pilgrims from different parts of the country and also from India visit this place every year. On the occasion of MakarSakranti (around mid-January) about half a million people, every year to take bath a holy confluence of Trishuli and Kali Gandaki River. Devghat is being developed as a center for the Hindu people entering into Vanaprastha and Sanyas Ashram (Stages of Life) for peace, renunciation, and salvation. Daily bus, taxi and temp services are available from to reach there.

Narayani River flows through the south-western part of the Metropolitan. It is the deepest river in the country. This is the most popular destination for river rafting which starts at Trishuli River, some 150 km north from Bharatpur. More than 40,000 tourists from different countries enjoy white water rafting adventure in this river every year. The beautiful creatures of nature like dolphins and crocodiles are also available in the river.

BisHajri Tal (Twenty thousand lake) which lies on 4 km southeast from the main city is famous for varieties of Birds.  Python and  Ghariyal.  In this place varieties of birds come from the Siberia too. Local authorities including this sub-metropolitan city are implementing programs jointly to develop this lake as a tourist destination.

The East Rapti River flows from east to west through the Chitwan Valley in Nepal, forming the northern border of the Chitwan National Park. It joins the Narayani River inside the protected area. Tourists can also embark on a canoe ride along the Rapti River inside the Chitwan National Park and take a close view of crocodiles and other wild animals. Tourists are excited to look at the crocodiles taking a sunbath on the river banks and take their photographs. 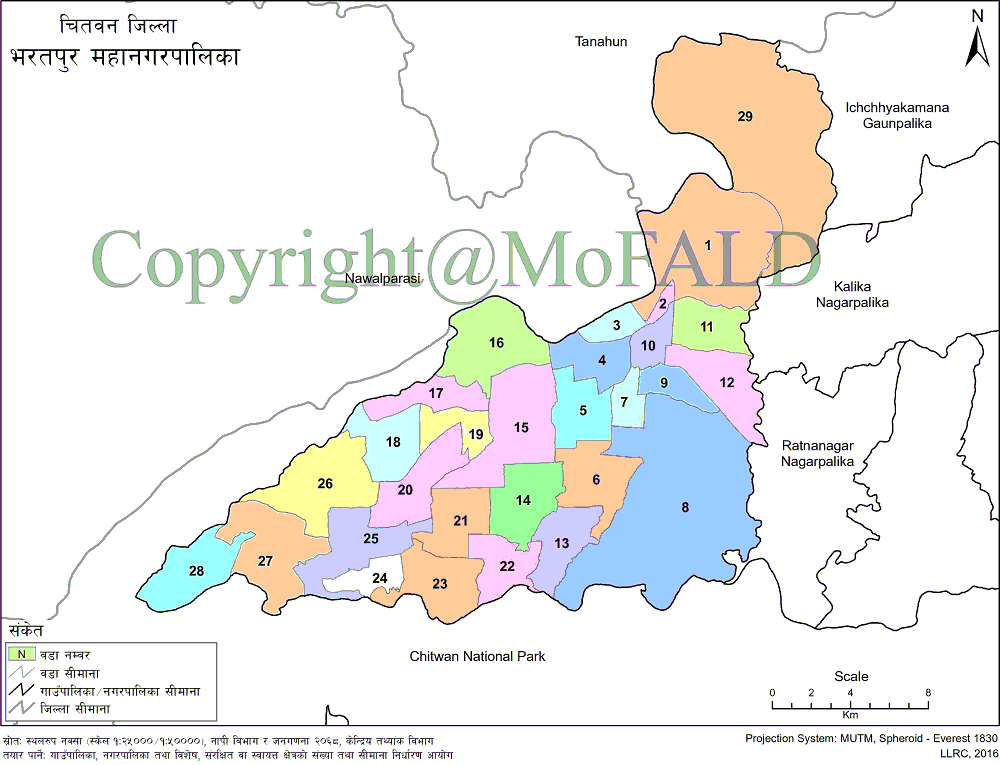