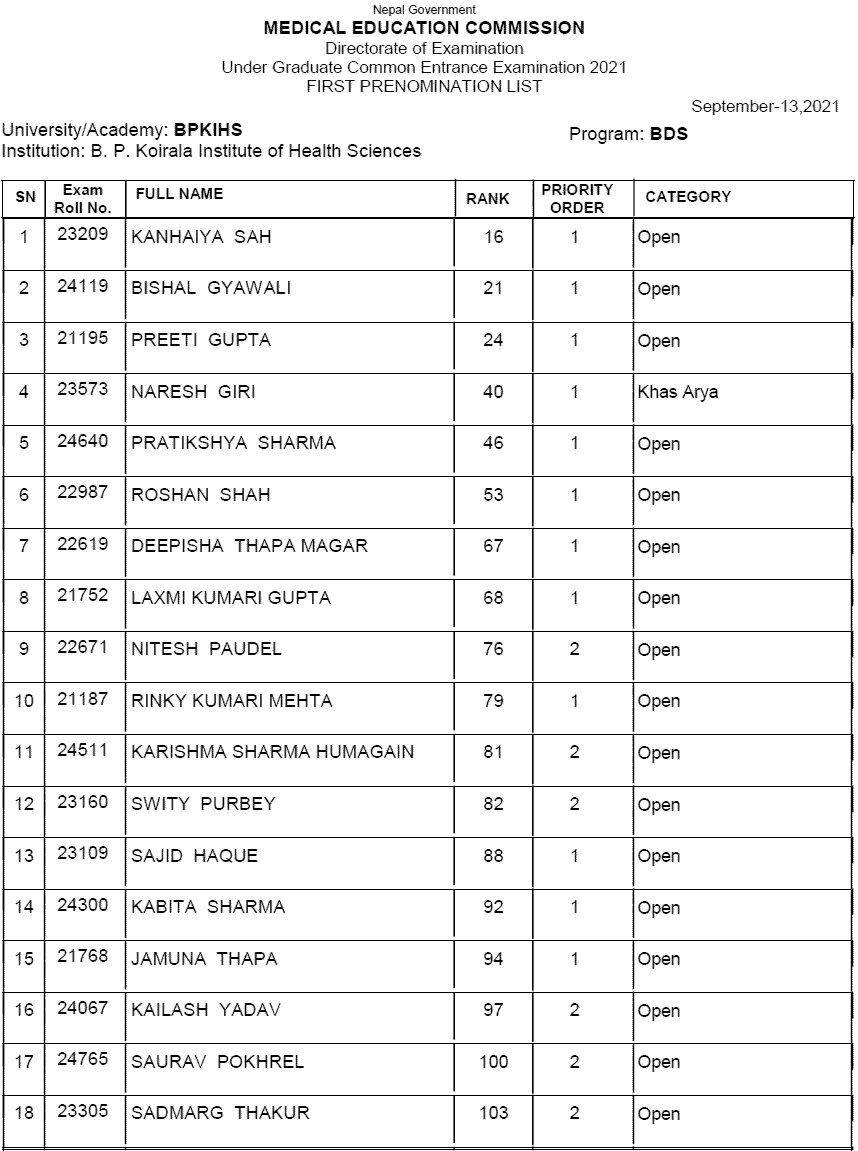 At the undergraduate level of medical education, a list of pre-nominations for scholarships and overseas matching seats has been published in all the universities and their affiliated institutes and institutes based on the qualifications of the integrated entrance examination conducted for this academic session and the priorities determined by the examinees. Candidates on the list must follow the instructions below.

1) Candidates who are listed in the pre-nomination list must accept or withdraw the information to study in the pre-nominated seat by 5:00 pm on 2078-05-31 and must inform the Commission through their online profile.

If a candidate who has been pre-nominated for only one seat does not provide any information within the stipulated time, the pre-nomination will be deemed to have been accepted automatically. However, in the case of pre-nomination in more than one educational program, it is mandatory to agree on only one program, otherwise, no seat can be nominated.

2) The password will be sent to the mobile of the selected candidate to open the profile. Candidates can browse to https://entrance.mec.gov.np and use their password to click on the "Check Your Status" button. Then click on the Set nomination button to accept (agree) or withdraw (disagree) by clicking on the radio button to inform.

3) The candidate will be automatically removed from the remaining matches of the year whether he/she is accepted or not as per the pre-nomination. However, if the candidate on the pre-nomination list withdraws within the stipulated time of non-study, he/she will get the opportunity of paid or other educational activities outside the group; Dissent must be made by 5:00 pm on 2078-05-31. In such a case, the person will be automatically removed from the list of scholarships. However, if there is a candidate for the same program fee and other educational programs, it can be included in the matching for the same. Candidates who do not withdraw and do not enroll in the nominated seat will not be allowed to be included in any of the scholarship (including foreign) quotas and paid groups received after this.

4) If a candidate is unable to study due to pre-nomination and his / her name is removed from the nomination, he/she will be re-matched in the vacant seat; The educational institution or "educational institution and educational program" may change in the priority determined by the candidate on the basis of merit list; Candidates of the last qualifying order who get the opportunity by changing the matching list will be given the opportunity to accept or withdraw their nomination within a period of 1 (one) day.

Therefore, if the matching is in the highest rank closest to his merit, the candidate is requested to follow the pre-nomination information carefully.

The candidate in the pre-nomination list will have to browse to https://entrancemec.gov.np and click on the "Check status. button and access the personal profile by entering the "Password" mailed to the candidate In order to mark his/her response to the matched seat.

The respective candidates should either ACCEPT or WITHDRAW the matched seat within the given time period of 3 days. In case a candidate Is pre-nominated for more than one academic program, s/he must accept the one which he wished to study and should compulsorily withdraw the rest.

After a candidate accepts the matching, s/he is supposed to take admission in the respective college/ campus within the due date.

Since there is more seats available than the total number of merit candidates, there will be only one event of Matching.

The remaining seat will be fulfilled by matching the merit and priority order of the foreign candidates who had duly applied with the second option, within the given deadline as per the notice of 16th March 2021, not to appear In MECEE-BL but to apply for the remaining foreign seat based on the score obtained in the national level common entrance examination of their respective country.

The seats remaining vacant henceforth will be converted Into Nepalese open (paying) seats.

Please keep following our website for the Admission lot (Accepted Led and the admission deadline will be notified hoar.