Prithvi Narayan Campus (PN Campus) was founded on 1 September 1960 (17th of Bhadra 2017 BS) in the Pokhara. PN Campus was initially named Prithvi Narayan Inter College and was started with 13 students and 2 teachers for post-secondary education and was run by the local community. Initially, the classes were conducted in Kanya School, Nadipur Patan, and moved to Bhimkali Patan in Bagar where it now exists. George John was the first Principal, and Narayan Bahadur Karki and Arjun Bikram Rana were the first administrative staff of the college.

On 20 August 1963 (4 Bhadra 2020 BS), the college resumed its first batch with the Bachelor of Arts (BA) study, which received its accreditation from Tribhuvan University. In the same year, under the Peace Corps Volunteering Projects, Douglas K. Wingham, Peter Farco, and Dorothy Mierow started working as volunteers to teach English and other courses in the college.

With the introduction the of New Education System Plan (NESP) on 1 Shrawan 2030 BS, the college was formally incorporated with Tribhuvan University as one of its constituent campuses, changing its title from ‘college to ‘campus’. In Shrawan 2033 BS, the Dean’s office of the Faculty of Humanities & Social Sciences under Tribhuvan University was moved to Pokhara within the premises of the campus from Kathmandu, which remained in Pokhara until 2040 BS. In 2035 BS, the Master of Arts (MA) in Economics under the Faculty of Humanities & Social Sciences was introduced for the first time in Pokhara. It was followed by the MA in Geography the following year in 2036 BS. 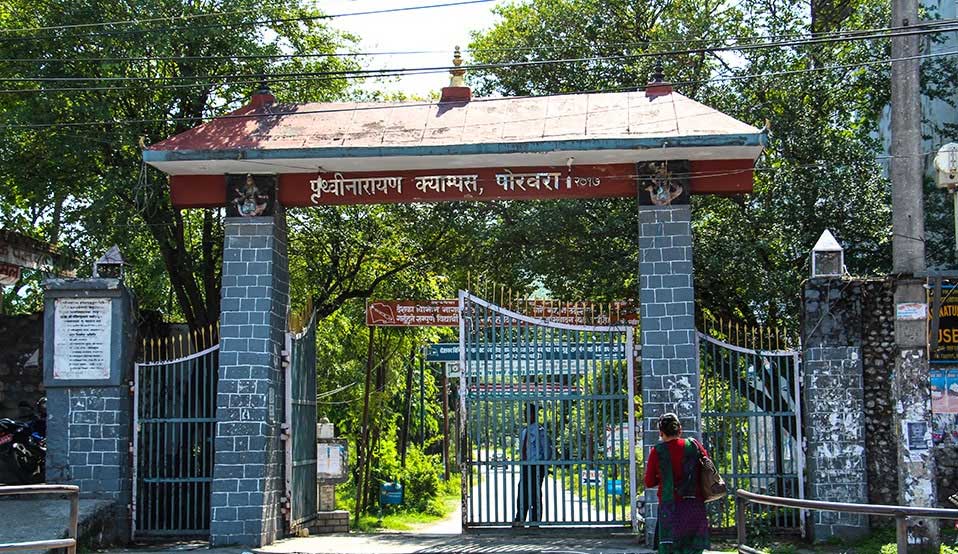 Now, PN Campus has 29 departments under 4 faculties and 1 institute: Faculty of Humanities & Social Sciences, Faculty of Management and Faculty of Law, Faculty of Education, and Institute of Science & Technology. In total, 34 programs are run and about 500 courses are on offer under these broad areas of study. To date, 642 faculty members and 122 administrative staff have been involved in providing higher education to more than 11,000 students in various academic programs on PN Campus.

The PN Campus is a state-run higher education institution under Tribhuvan University and has been the major center for higher education in the western region. The campus is now spread over 36 hectares (over 721 Ropanis) along the banks of the Seti Gandaki River.

As per the concept of multi-university put forward by the National Education Commission (NEC) in 1992, the Higher Education Project (a World Bank Project) in 1993 proposed to develop regional clusters: one in the western region and another in the eastern region, which would emerge as universities in future. PN Campus was selected in the western region as the lead campus of the cluster. In accordance with the Decentralization Act of Tribhuvan University (1998) under this concept, the campus elected a management committee in September 1999 to handle the tasks such as the construction of physical infrastructure, formulating rules and regulations, working plan and economic policies, and an executive committee under the management committee to look after the day to day affairs of the campus.

In 2006, the UNDP Global Environment Facility funded a project to develop its open space as Green Space Park. The project’s main objective was to provide students with a space for learning about environmental conservation and using open space for leisure and recreational purposes in order to fulfill the needs of the growing urban population in Pokhara. In more than 50 years, the campus has become one of the country’s leading campuses in the region, carving out a reputation as an academic powerhouse. It has a clear focus on excellence that has secured local and national recognition alongside longer-established institutions in the country.

PN Campus is situated in the beautiful city of Pokhara, It is the leading teaching and research campus in the western region of Nepal. With over 50 years of its history, the campus is one of the oldest and largest campuses of Tribhuvan University and is dedicated to finding solutions to challenges and preparing students for leadership in a complex world.

are you accepting new student

are you accepting new student

When are we getting the class for law?