Vice President Nanda Bahadur Pun said that the 9th National Games held in Pokhara, a tourist city, was a great celebration of athletes. He expressed his belief that this sport will prepare new talents. He said that this competition will contribute to establishing Gandaki province as a sports tourism destination. He wished success to all the players asking them to participate in the game with confidence and high morale. Stating that the sports field should be developed in accordance with the times, he emphasized that the existing problems should be resolved. 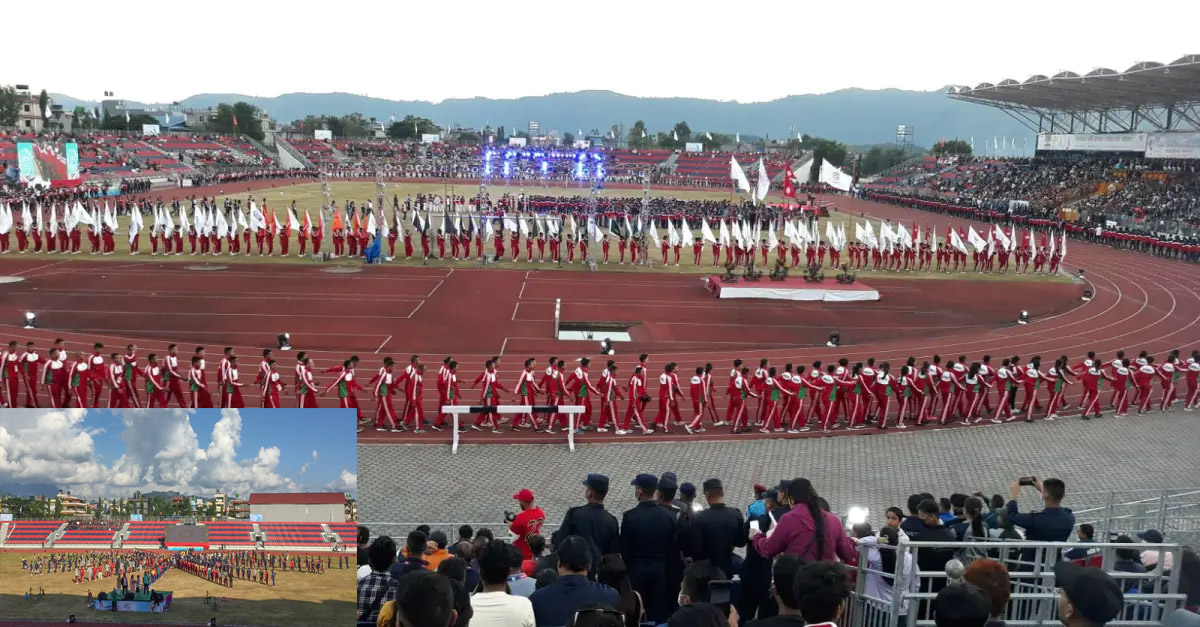 In the ceremony, teams from all seven provinces, Nepal Army, Armed Police, and Nepal Police have marched. The Musk Deer mascot found in Gandaki Province prepared for the 9th National Games was included in the March Pass. In this process, the cultural tableau of different castes has been presented. Before the opening ceremony, there was a significant presence of sports lovers in the parapet of the stadium. Songs and dances reflecting the culture of all seven provinces were presented. Explosives were made during the opening.

Chairman of the main organizing committee of the ceremony and Minister of Youth and Sports Maheshwarjung Gahatraj hoisted the flag of the 9th National Games. Pokhara and Machhapuchhre, the capital of Gandaki province, are outlined on the flag. Minister Gahatraj said that all three levels of government should be involved in the development of sports. He said that the sports master plan and other programs have been promoted. He said that the sports-related bodies from the center to the local level are working on the development of the game. He said that according to the federal structure, all the provinces participated in this competition for the first time with their own preparations. He expressed his belief that with this competition, the players who will be prepared for the future will be able to compete nationally and internationally.

Jeevan Ram Shrestha, Minister of Culture, Tourism and Civil Aviation and President of the Olympic Committee, said that this game in Pokhara will further highlight the tourism potential of Gandaki province along with the development of the sports sector. Member Secretary of the National Sports Council, Tanglal Ghising, welcomed and said that it will have an important place in the history of Nepali sports.

11 teams from seven provinces, three departments, and NRN are participating in this tournament, which includes 36 games and two exhibitions, including 38 games. It is said that a total of 6,157 players will participate in the competition. About 1,300 medals will be contested in the competition.

Out of 36 games, 26 games are being played in Pokhara and others in seven districts of Gandaki. All the districts except Lamjung, Manang, and Mustang of Gandaki have conducted the games of the ninth national sports. On the occasion of the opening ceremony, Volleyball Referee Pahalsingh Thapa and Paragliding Sushil Gurung on behalf of the players took the oath with the commitment to play according to national and international rules in all the games included in the competition. During the ceremony, the Olympic torch was lit by Dika Bahadur Bogti.

Startup & Idea Fest 2022 from 4th to 5th November in Kathmandu