Nepal Army Directorate General of Military Welfare, Baladikrit Division, Jangi Adda, Bhadrakali, Kathmandu, Nepal: This information has been published for the information of all those related to providing military welfare scholarships for the academic session 2079 among the various programs run under the Military Welfare Fund.

(b) Students receiving the scholarship: Sons and daughters of Nepali Army veterans and retired soldiers (only the name of those who have submitted the scholarship in the previous academic session should be applied; if the 12th-grade scholarship has been taken in the past, then the next child cannot apply).

(a) Should be the son/daughter of Nepali Army serving and retired soldiers.

(b) Only 1 (one) Child (son/daughter) of beneficiaries will receive the scholarship.

(c) Only children studying from Class 4 to Class 12 in the academic session 2079 will get this facility.

(d) In the annual examination of the year 2079, the students studying in community government schools should have obtained 40% (GPA 1.6) overall and 50% (GPA 2.0) overall in case of students studying in institutional private schools (in the achievement certificate where only the grading is mentioned, such as: If the grading is A+ or D then percentage or GPA must be open).

(f) In the case of active soldiers, only descendants (sons/daughters) who are registered through HR Digitization of Nepali Army will get this facility.

(g) Incumbent and retired beneficiaries who were injured during the previous conflict and were in need of rehabilitation, among the descendants of a couple of military gross rank who died in the line of duty while fighting fire in Ramechhap district and died in the Ramche landslide in Rasuwa district, operated at the expense of the Military Welfare Fund. If 1 (one) son or daughter is studying in educational institutions or empaneled schools, then 1 (one) child and two (two) children can apply for 2 (two) children if they are not studying in educational institutions or empaneled schools run by the military welfare fund.

(h) 2 (two) persons are allowed to apply for student scholarships if they are descendants of incumbent and retired beneficiaries of the 14 earthquake-affected districts who died in the 2072 earthquake. (Only if Military College or Empaneled Concession not availed)

(j) One descendant is adopted as a son or daughter of a member of the Nepali Army and a retired general in accordance with the prevailing Nepalese laws.

Students who are not eligible for this scholarship:

(c) Students who have not submitted their application within the specified time limit (beneficiaries who have missed the application in a specific location) will be allowed to apply for the scholarship if they come to the General Directorate of Military Welfare within the specified time limit and submit the documents, but after the time limit expires, the said beneficiaries will not be able to apply.

(d) If 1 (one) child of the beneficiary is currently studying in educational institutions with empaneled contracts.

(e) Persons who have been dismissed for various reasons during the service period and have not received a lease for welfare family relief cannot apply for a welfare scholarship.

5) Documents to be submitted with the application

(a) Copy of character certificate.

(b) The result letter of the first quarter examination of the academic session 2079 and a copy of the letter from the school stating the name of the student studying in the said academic session, class, student's name, class, date of birth and parent's name.

(a) Copy of character certificate.

(b) The result letter of the first quarter examination of the academic session 2079 and a copy of the letter from the school stating the name of the student studying in the said academic session, class, student's name, class, date of birth and parent's name.

(e) Parentage Certificate or Descendant Certificate from the concerned Gaupalika/Nagarpalika. 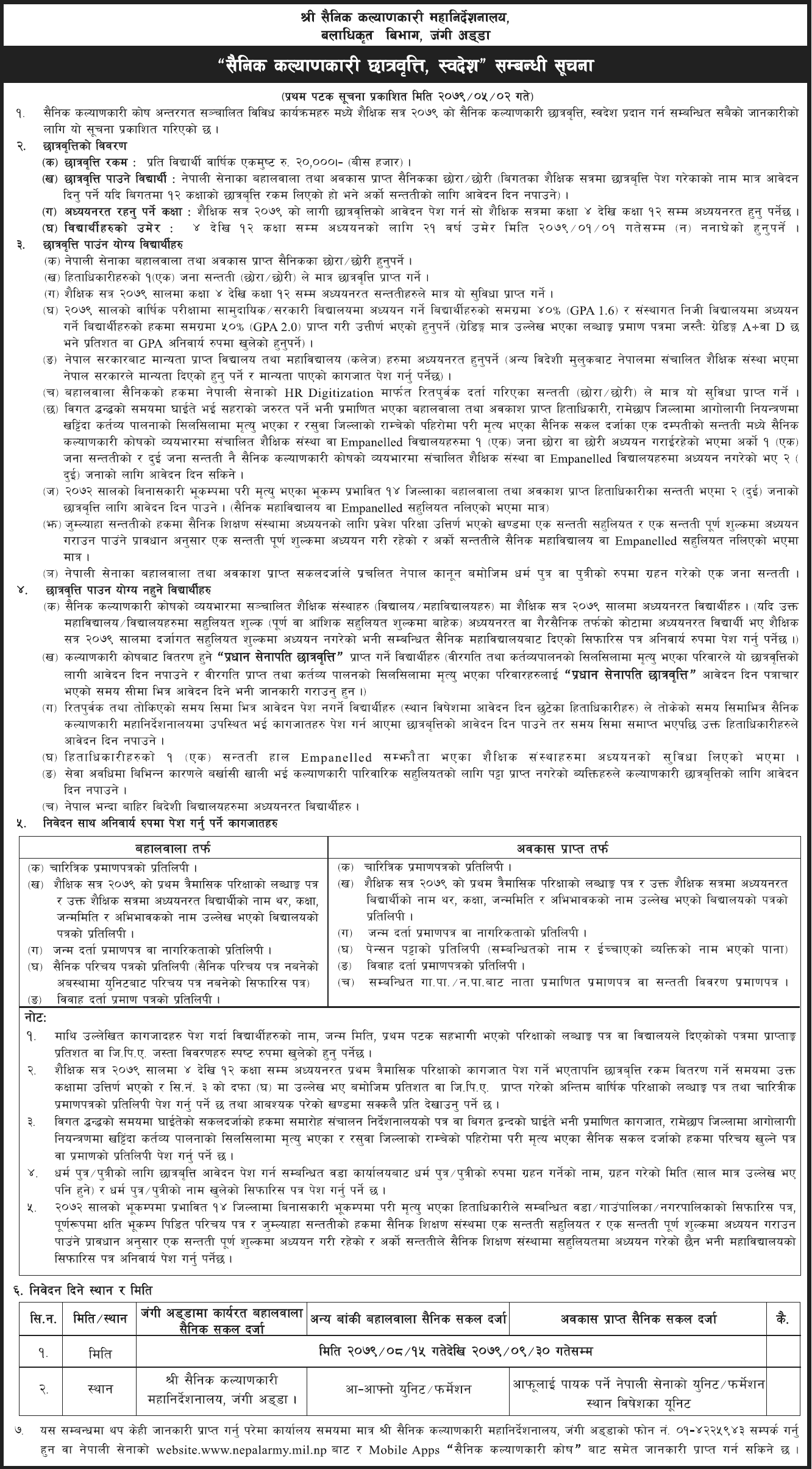