Sahas Urja Limited has issued an initial public offering (IPO) to the public from Wednesday (September 22). The company has issued 7 million units of shares worth Rs 700 million.

The company can apply for the shares of the eviction gear till September 26 (10th of Ashwin 2078). If the application is not received as per the demand within that period, the deadline will be extended till October 6 (20th of Ashwin 2078).

Investors interested in the company's IPO can apply for a minimum of 10 units and a maximum of 1 million 50 thousand units. applications for the Sahas Urja Limited IPO can be applied from all C-ASBA member banks and financial institutions approved by the Securities and Exchange Board of Nepal (SEBON), from designated branch offices, and also from the My Share mobile app.

ICRA Nepal has given ICRP IR Double B Plus rating to the IPO issued by the company. This indicates that there is a moderate risk in meeting financial obligations on time.

The issue and sale of the company's securities are NIBL ACE Capital Limited and the guarantor is a citizen investment fund.

The Registrar's Office of the company is located in Kathmandu Metropolitan City Ward No. 1. The company's project site, hydropower generation center, and other physical infrastructures are located in Solu Dudhkund Municipality and Thulung Dudhkoshi Village Municipality of Solukhumbu District.

The company is developing the Solukhola Dudhkoshi Hydropower Project with a capacity of 86 MW.

The Ministry of Energy, Government of Nepal through the Department of Power Development had given permission for 2071 Ashwin 2 for power generation from the project.

The company aims to generate electricity commercially from the project from 2079 Jestha 20. The total cost of the project is projected to be Rs 11.86 billion.

At present, the paid-up capital of Sahas Urja Limited is Rs. 2.45 billion. The company's paid-up capital will reach Rs 3.5 billion after the IPO is sold to locals and the general public.

Him Prasad Pathak is the chairman of the company's board of directors. Similarly, Sushil Thapa, Mukti Ram Pandey, Bhoj Bahadur Shah, Minraj Kandel, Mahendra Kumar Giri, and Paritosh Poudyal are on the committee.

At present, all the founding shareholders are on the board of directors. The company has stated that it will select the operator on behalf of the general shareholders after the IPO.

The company has made future plans and strategies to grow its business and services. The main objective of the company is to establish itself as a leading company in the development of hydropower in Nepal.

The company has also stated that it will invest in commercially viable hydropower projects to achieve its objectives. 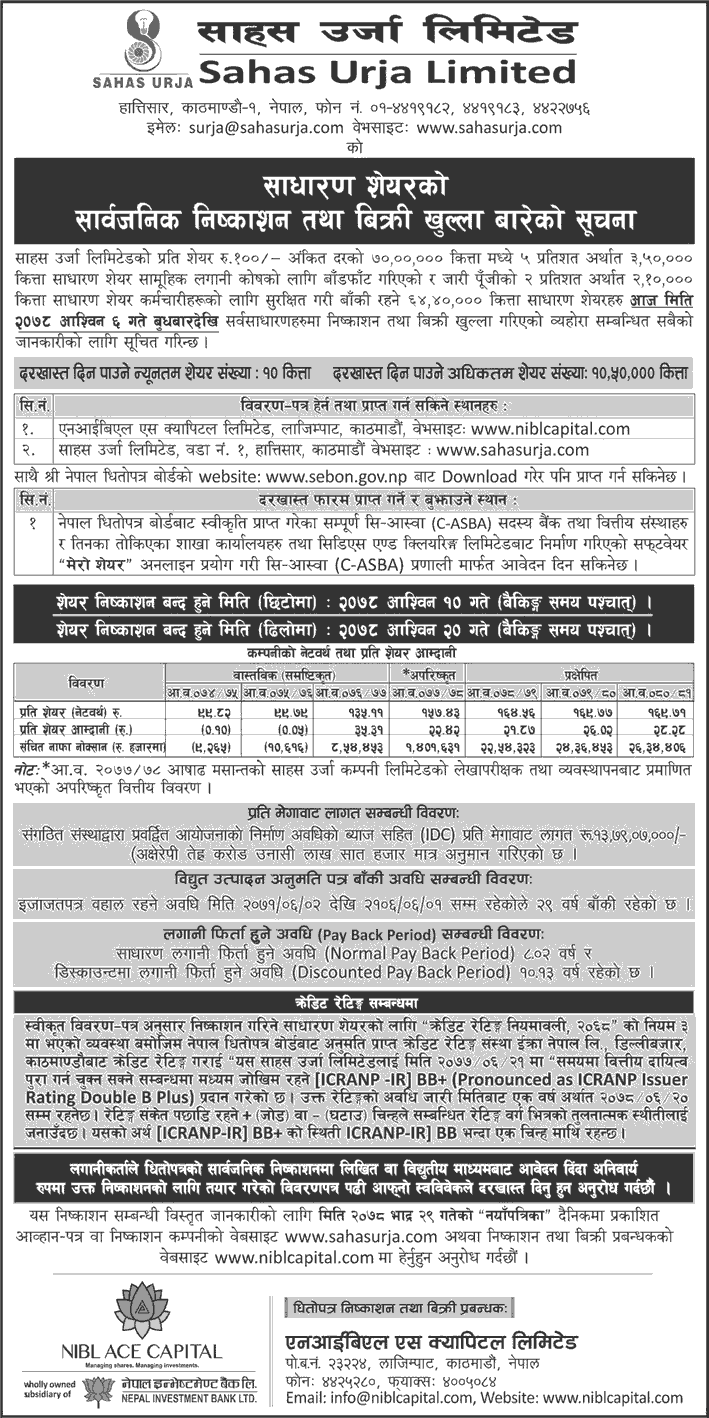 Minister of Education Directed to Amend the Rules of TSC