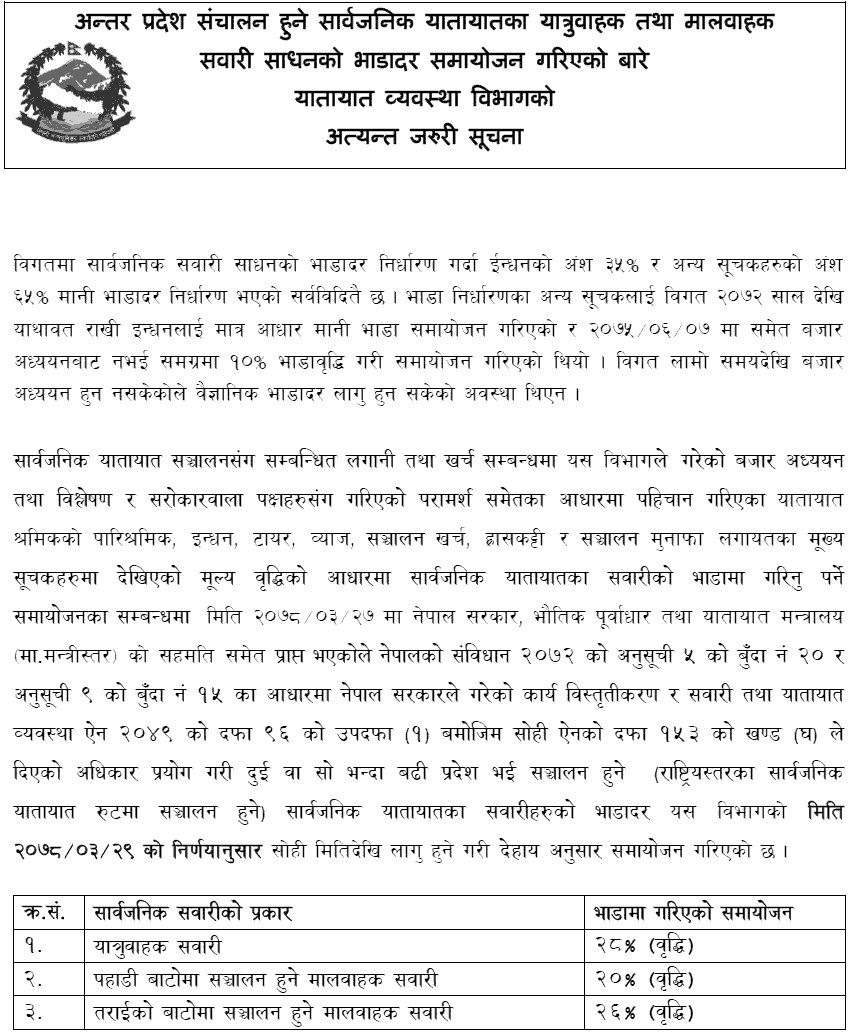 According to the scientific fare adjustment rules made by the government in 2065 BS, the fare has been fixed at 35 percent of the price of fuel and 65 percent of other expenses including spare parts.

After 2069 BS, other indicators of fare determination have been kept the same since 2072 BS and the fare has been adjusted on the basis of fuel only. Even in 2075 BS, the overall rent was increased by 10 percent without any market study. As the market study could not be done for a long time, the scientific fare could not be implemented.

Adjustment of public transport vehicle fares based on the price increase in key indicators including transport, labor wages, fuel, tires, interest, operating expenses, depreciation, and operating profit identified on the basis of a market study conducted by the department on investment and expenditure related to public transport operation and consultation with stakeholders. The department has issued a notice.

The Department has informed that the work done by the Government of Nepal and in accordance with subsection (1) of section 96 of the Vehicle and Transport Management Act 2049 BS, operating in two or more provinces using the right given by clause (d) of section 153 of the same act. It has been stated that only the fare of public transport vehicles operating on the route has been adjusted.

The department has said that the decision should be taken by the concerned state and local level in the case of public transport running at the local level despite the adjustment of the fare of inter-state vehicles.

Provisions to be followed regarding public transportation fare implementation: For the benefit and convenience of the general public, the transport businessmen are requested to immediately implement the provisions as per the details provided in the law.

All operators, businessmen, drivers, operators, assistants, and passengers related to public transport shall fully abide by the Public Transport Code of Conduct, 2067 BS.

It has been made mandatory for the bus / mini bus / micro bus / jeep to take extra fare by operating deluxe / standard service and get additional fare only after the quality inspection from the VFTC offices under this department and certification in the vehicle registration book.

The system of providing relief to the students, the disabled and the disabled injured, and senior citizens of the people's movement at the prescribed rate has been maintained. While giving concession to the mentioned category who should be given concession in rent, this arrangement should be fully implemented without specifying a certain route, quota number, day, and time. In addition, the beneficiaries are requested to show their original identity card and the concession is issued and the school, university, and other educational body issuing the student identity card is requested to issue the original student identity card only as per their record.

Effective implementation of the provision of issuing passenger tickets by mentioning the fare amount and location to the passengers at the beginning of the journey will have to be done by the transport operators.

Every passenger public transport vehicle will have to see the fare according to its route certified by this department and post it on the vehicle and ticket counter. The concerned business committees are requested to provide information by placing hoarding boards in the main places clearly stating the distance and fare.

Arrangements will have to be made to have two drivers on long-distance night buses.
Special attention should be paid to reduce accidents.
Drivers must carry an identity card.

Arrangements will have to be made to operate the transport service in a clean and competitive manner.

FNJ will also take action if the rent is not exceeded.

To keep the official information board of the changed fare informed to the public.

All transport service operators and businessmen are advised not to charge more than the mentioned fare and to issue passenger tickets by mentioning the amount and location of the fare.

Fares will be monitored at least once a month by the Department of Transport Management with the participation of representatives of traffic police, transport business associations, and consumer welfare organizations.

During the period of the COVID-19 outbreak issued by the Government of Nepal, the Public Transport Operation Guideline, 2077 should be fully implemented and the transport service should be operated.

- The prescribed fare will be posted on the website of this Department www.dotm.gov.np. It is requested to submit the prescribed fare, public transport code of conduct, and other documents to the department.

Passengers are requested to be aware and conscious of the above-mentioned arrangements. If anyone has taken more than the prescribed amount of fares, along with proof, fax no. 4474922 hotline telephone no. 4474767 Email: [email protected] or Hello Government Room of the Office of the Prime Minister and Council of Ministers Toll-Free No. 1111 Fax No. 1100 Email: [email protected] or SMS to 1111 The Department of Transport Management cordially requests you to inform the toll-free numbers 101 and 103 or the Transport Management Office and also provide the necessary assistance to the mentioned bodies.

Since the adjusting team will be deployed and the team will submit a detailed report on the rent and rent as much as possible, if there is any change in the rent list or if there is a need to maintain the rent, or if you have any issues, please send it to this department for amendment.

Government to Test the Urine of all Citizens Above 40 Years

Name List of Awardees on the Occasion of Constitution Day 2078