According to the proposed salary scale sent by the Ministry of Finance to the Council of Ministers for the final decision, the salary of officers to secretaries has been increased by 24 percent. Whereas in the budget of the current fiscal year 2079/80 announced on Jestha 15 last year, the salary of all government employees was increased by 15 percent with effect from the 1st of Shrawan. In the name of adjusting seniority, the government has proposed a salary higher than the one announced in the budget.

Similarly, the starting scale salary of the Undersecretary (Upa Sachiv) is currently 42 thousand 380 rupees, according to the proposal, it will increase by 23.35 percent to 52 thousand 279 rupees.

The starting scale salary of the Joint Secretary (Saha Sachiv) will also increase by 23.63 percent to Rs.61,500 from the current Rs.49,380. The salary of a special category secretary has been proposed to be increased by 18.21 percent to Rs.74,221.

In the past, there has been dissatisfaction in the administration system because of the high salary of the army police officers who are below the rank of civil servants.

This subject of dignity and salary was admitted to the Committee on Industry and Commerce and Labor and Consumer Affairs under the House of Representatives. Then the committee wrote a similar letter to the Chief Secretary and the Secretary of the Ministry of Finance on 15th Shrawan.

In the letter written by the committee for the implementation of the decision, it is seen that the salaries of the employees in the previous order of merit have been set low, this has had a negative impact on the chain of command of the employees, there is no situation in which respect is shown according to the protocol and there is a lack of motivation and it has also affected the effective performance. , it is mentioned that the salary scale should be made apart from the other benefits received according to the nature of the group, sub-group.

According to the instructions of the committee, the Ministry of Finance has also approved the new salary proposal in the same way. 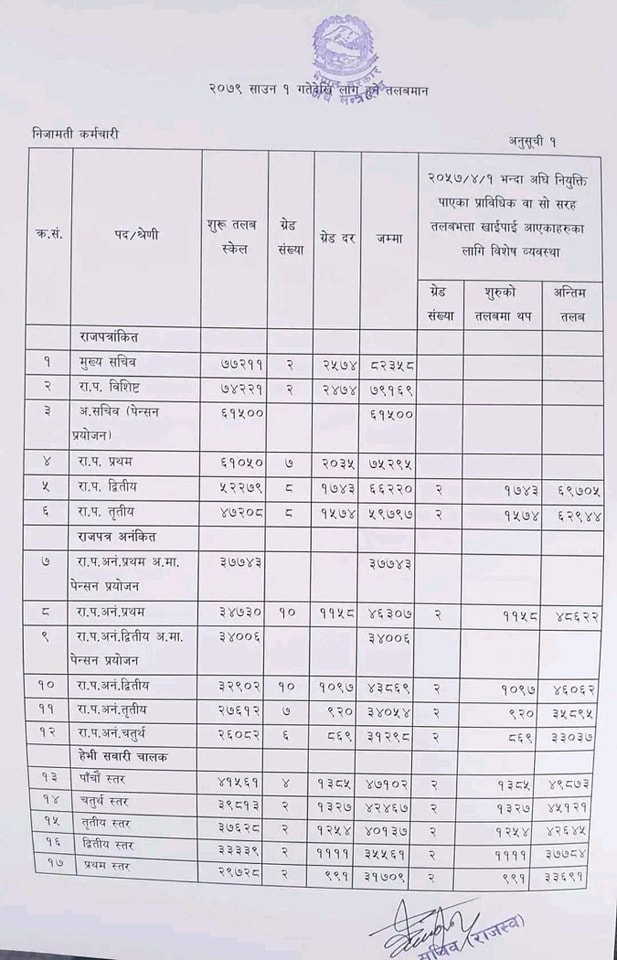